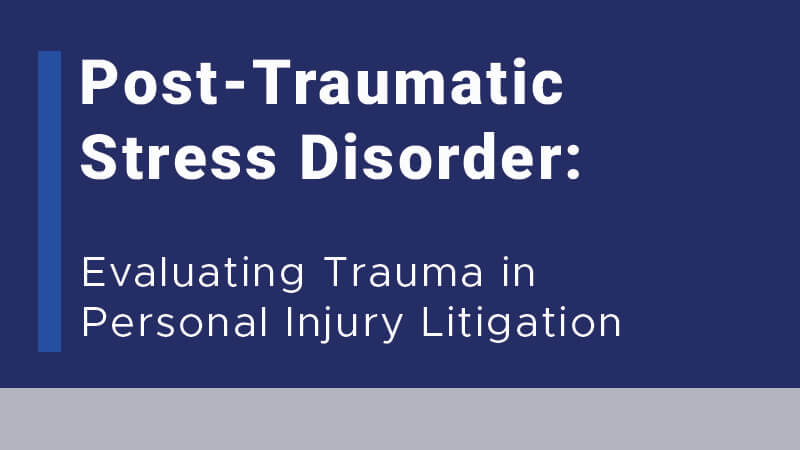 Post-Traumatic Stress Disorder (PTSD) is one of the most common psychological conditions that’s reported by plaintiffs in personal injury cases.

Historically, courts didn’t entertain the possibility that a plaintiff could experience emotional damages due to an event if there were no physical damages.  PTSD has received more attention thanks to additional research and advocacy by the mental health community.

We often get the following questions from attorneys regarding PTSD in personal injury cases:

The goal of this blog post is to help answer these questions and provide a general overview of PTSD and the challenges of evaluating damages associated with PTSD in personal injury cases.

What Are the Signs and Symptoms of PTSD?

The specific criteria for diagnosing PTSD can be found in the DSM-5, which was published in 2013.

If you have an expert that’s using criteria from the DSM-IV-TR (which we have seen several times), they are using criteria that are outdated and haven’t been used since 2013.

Here is a summary of the criteria for diagnosing PTSD according to the DSM-5:

Criterion A: Stressor (one required)

Criterion B: Intrusion Symptoms (one required)

The traumatic event is persistently re-experienced in the following way(s):

Avoidance of trauma-related stimuli after the trauma, in the following way(s):

Negative thoughts or feelings that began or worsened after the trauma, in the following way(s):

Trauma-related arousal and reactivity that began or worsened after the trauma, in the following way(s):

In personal injury and worker’s compensation cases, Criterion A is the most important criteria that have to be met.

If Criterion A isn’t met then there is no clinical diagnosis of PTSD.

If the exposure to the traumatic event doesn’t fall into one of these categories, then there is no clinical diagnosis of PTSD.

In these cases, it’s important to talk about the functional impairments they might be having due to the symptoms from Criterion B-E.

Here is an example where the plaintiff would not meet Criterion A:

John was a driver of a vehicle and he was involved in an accident on the freeway.  A semi-truck rear-ended his car at approximately 15 miles per hour, causing a substantial amount of damage and the car was totaled.

John was otherwise unharmed but did experience some minor soreness in his neck and back.  He now experiences intense anxiety and hypervigilance when he is driving near semi-trucks.  He has also stopped driving on the freeway.

Although John is experiencing some symptoms consistent with PTSD, he would not meet the diagnostic criteria because he wasn’t exposed to an event that threatened death or serious injury.

Here is an example where the plaintiff would meet Criterion A:

Bill was out for a walk in his neighborhood.  A neighbor’s dog got out of the yard and started to charge at Bill.  Bill started to run but the dog caught up to him and mauled him on his face, hands, and neck.  Bill thought the dog was going to kill him.

His injuries weren’t life-threatening but he required staples and sutures to close the bites on his face and neck.  He has deep scars on his face and will require cosmetic surgery to try to fix them.  Bill is now fearful of dogs, experiences intense hypervigilance around animals, and has recurrent nightmares of the attack.

The event that Bill experienced would meet Criterion A because the event caused serious injury and Bill believed that he was going to be killed by the dog.

What are the Risk and Protective Factors for Developing PTSD?

The reality is that a vast majority of people who experience a traumatic event don’t develop PTSD.  For example, Breslau et al. (1996) found that 40-50% of women with a history of sexual assault who were interviewed didn’t develop PTSD.

Risk and protective factors help explain why some individuals develop PTSD while others don’t develop PTSD.

The risk factors that will increase the risk for developing PTSD include:

The protective factors that will decrease the risk for developing PTSD include:

How Do You Evaluate for PTSD in Personal Injury Cases?

We’ve already written a detailed blog post on the five-step model we use to evaluate causation and damages in personal injury, so we’re not going to go over the full process we use in this post.

Given the potential monetary damages that can be awarded in personal injury cases, evaluating for PTSD in these cases requires a more careful and methodical approach than in clinical cases.

The reality is that the traumatic event is the only criterion that is objectively reported.

The remaining diagnostic criteria in the DSM-5 require a subjective interpretation of the symptoms by the evaluator.  In addition, the symptoms are subjectively reported by the plaintiff and can be easily exaggerated.

This is important because in personal injury cases, the base rate of malingering can be as high as 50%.

Given the potential for litigants to potentially over-report symptoms, experts need to be careful when choosing the tests and questionnaires they administer to litigants.  It’s also important to gather information by interviewing collateral sources and reviewing records. We talk about this in greater detail in our personal injury post.

What Are the Tests Used to Diagnose PTSD?

There are a couple of tools available to assess for PTSD.  These still rely on the subjective reporting of the plaintiff.

These questionnaires are great tools to use in clinical settings but not appropriate to exclusively use in forensic settings.  If an evaluator is going to use one of these questionnaires, they need to be used with one of the symptom inventories discussed below.

These questionnaires are “face valid”, meaning that it’s obvious to an untrained person what the questionnaire is assessing for. It’s very easy for someone to endorse all of the symptoms on the questionnaire and it would look like they have PTSD on paper.  They don’t have any validity indicators that show if the person is over-reporting their symptoms.

In personal injury cases, it’s important to use tools that have validity indicators and aren’t as face valid.  The MMPI-2 RF and the PAI have built in validity indicators and are more appropriate to use when doing evaluations in personal injury cases.  They also help assess for other mental health conditions (e.g. depression, anxiety, substance use, personality disorders), which can be co-morbid with PTSD.

They can be used in conjunction with one of the structured interview tools listed above in order to do a comprehensive evaluation.

A thorough and comprehensive evaluation of PTSD in a personal injury case will use information from a clinical interview, collateral/ objective sources of information and psychological tests and questionnaires to corroborate the symptoms and impairments the plaintiff is reporting.

In some cases, the onset of the symptoms can be delayed.  If the symptoms start 6 months after the event, the individual can still be diagnosed with PTSD.

Those who are at most risk for delayed diagnosis have some signs of PTSD but don’t have enough to meet the criteria immediately after the event.  It’s rare for them to spontaneously develop delayed PTSD without any prior symptoms.

Research also shows that the occurrence of additional life stressors or traumatic events may increase the likelihood that someone will develop PTSD in response to a prior traumatic event that wasn’t causing them distress.

The experience of the additional trauma or stress can impact their ability to cope with a prior traumatic event, increasing the likelihood that existing subthreshold PTSD symptoms become more severe.

For example, let’s take a case where a female employee has a prior history of a violent sexual assault but she has subthreshold PTSD symptoms.  She starts to experience sexual harassment by her supervisor and her supervisor inappropriately touches her at work. It’s possible that her symptoms can worsen due to the new stressor she experienced.

It’s also possible that the survivor of a traumatic event will acquire additional information at a later date that will alter their perception of the danger they faced during the incident.

For example, they might see photos or videos of the accident scene or assault that document their life-threatening injuries.  This information can make them feel less safe and cause them to experience symptoms consistent with PTSD.

Treatability and the Effect of Treatment in PTSD

PTSD is a debilitating mental illness but it’s also treatable.  In many individuals, PTSD symptoms will spontaneously go into remission without any treatment.

Depending on the traumatic event and the risk and protective factors present, some individuals will continue to present with signs of PTSD and would benefit from treatment.

For example, victims of serious car accidents have an estimated PTSD rate of 29% to 34% within several months after the accident. Chronic PTSD rates for the same group ranged between 9% to 15%.

We’ve gone over a couple of simple scenarios where someone might develop PTSD. Here is an example of a situation that highlights the importance of doing a thorough evaluation when evaluating a plaintiff for PTSD in personal injury litigation.

This case was taken from Posttraumatic Stress Disorder in Litigation, Second Edition: Guidelines for Forensic Assessment.

A 30-year-old male is rear-ended at approximately 15 mph causing minor to moderate damage to the rear bumper.  After the accident, he starts to experience recurrent dreams and flashbacks.  His treating provider diagnoses him with PTSD and attributes it to the accident.

The plaintiff files a lawsuit against the defendant on the grounds of negligence causing psychological injury.

The plaintiff is re-evaluated by a forensic psychologist who learns that his father committed suicide by shooting himself in front of the plaintiff less than a year ago.  The plaintiff was also physically abused by his father when he was a child.

After the car accident, he starts to experience flashbacks to when the gun was fired.  He has dreams where he sees vivid images of dead bodies and corpses.  He stops going to work consistently, often calling out sick, starts to drink alcohol almost every night, and starts to have an affair.  He loses over 20 lbs., has trouble sleeping, and has difficulty focusing and staying alert throughout the day.

He complains that he feels detached from others, feels guilty for not helping his father, and believes that his life will end soon. He also starts to lash out at his co-workers and friends over minor disagreements.

The plaintiff is diagnosed with PTSD, delayed onset.  The PTSD relates to the plaintiff observing his father kill himself rather than the accident.  The plaintiff had prodromal signs of PTSD that went unnoticed for the past year.

In a case like this, it’s possible that the car accident was the “final straw” that triggered the full-blown PTSD.  This would be an example of an “eggshell skull” client.

The “eggshell skull” principle says that you take the victim as you find them. It holds the defendant liable for all consequences resulting from their activities leading to an injury to another person, even if the victim suffers an unusually high level of damage due to a pre-existing condition.

Post-Traumatic Stress Disorder (PTSD) is one of the most common psychological conditions that’s reported by plaintiffs in personal injury cases.

Given the potential for litigants to potentially over-report symptoms, experts need to be careful when choosing the tests and questionnaires they administer to litigants.  It’s also important to gather information by interviewing collateral sources and reviewing records.

A thorough evaluation will focus on the functional impairments caused by the traumatic event rather than just determining if the person meets the diagnostic criteria for PTSD per the DSM-5.

At the end of the day, it’s the functional impairment that determines compensation, not the diagnostic label.

Fortunately, PTSD is treatable and in most cases, plaintiffs can eventually make a full recovery depending on the severity of the traumatic event and their risk and protective factors.

We’re hoping that this blog post helped answer some of the common questions about PTSD in personal injury litigation.

You can click this link to learn how to retain us to complete a personal injury evaluation. 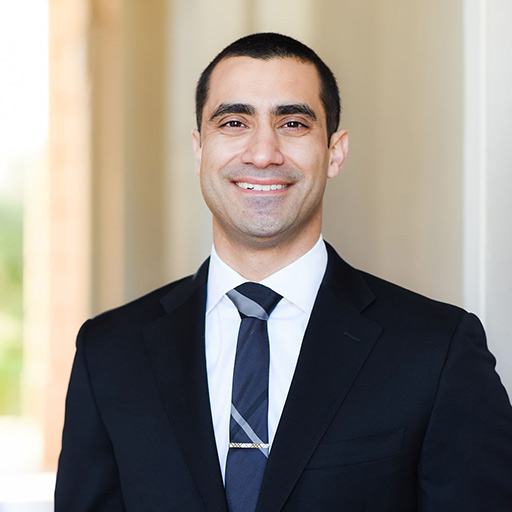