Not Guilty by Reason of Insanity vs. Incompetent to Stand Trial: What’s the Difference Between Them? 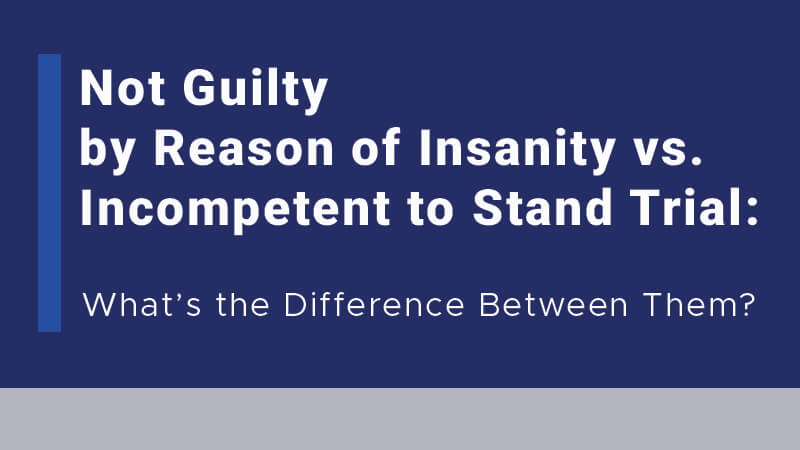 The terms insanity and competency are two legal terms that come up often in the criminal justice system.

Most people get the two terms mixed up and don’t know the differences between them.

We’ve already talked about Not Guilty by Reason of Insanity (NGRI) and Competency to Stand Trial in two other blog posts.

What’s the Difference Between Insanity and Competency?

1:  Insanity and Competency Are Evaluated at Different Times

The main difference between insanity and competency is that they are evaluated at different times.

Competency is evaluated while the person is going through the legal proceedings.  This is AFTER they have been arrested and they have not yet been convicted of the crime.  Their state of mind is being evaluated in the present.

We’ve already talked about Not Guilty by Reason of Insanity (NGRI) and Competency to Stand Trial in two other blog posts and we encourage you to read them for a more detailed explanation.

In the meantime, we’ve included a quick and simple  explanation of the two legal terms:

Here is the legal definition of insanity under California law (PC 25):

At the time of committing the offense, due to mental disease or defect (no personality disorders, seizure disorder, adjustment disorder, or substance-induced psychosis), the defendant was incapable of either…

Here is the legal definition of incompetency under California law (PC 1367):

A defendant is mentally incompetent to stand trial if, because of a mental disorder or developmental disability if they fall into either of the two prongs:

It’s important to remember that incompetency is judged on the day of the proceedings.

These two prongs help establish if the defendant has a rational and factual understanding of the proceedings against them.

3:  Insanity and Competency Are Determined by Different Parties

Not Guilty by Reason of Insanity (NGRI):

NGRI  is an affirmative defense and the plea is entered by the defendant.  Ultimately, a jury decides if the defendant was NGRI at the time the offense was committed.

Competency isn’t a plea.  The issue of competency can be raised by anyone.  For example, the defense attorney can bring up the issue and state that their client doesn’t have a rational or factual understanding of the proceedings and is incompetent.

The defendant will then be evaluated by a psychologist or psychiatrist and a report will be given to the court.  The judge will then declare the defendant to be incompetent and they will be ordered to a competency restoration program.

4:  Insanity and Competency Have Different Consequences

You can read in more detail about Not Guilty by Reason of Insanity (NGRI) and Competency to Stand Trial consequences in our previous blog posts.

Here is a quick overview of the consequences of these two outcomes:

In California, if a defendant is found to be Not Guilty by Reason of Insanity (NGRI) the defendant is sentenced to the Department of State Hospitals (DSH).

According to PC 1026, the defendant is sentenced to DSH for the maximum term allowed for their crime.  After they have served the maximum term and are deemed by DSH to continue to pose a substantial danger to the community, their sentence can be extended every year for the rest of their lives.

CONREP has its own set of criteria that they use to determine if a patient is suitable for discharge to the community.  You can read about CONREP’s criteria here.

If a defendant is found to be incompetent to stand trial, they are ordered to attend a competency restoration program.

If they are charged with a felony, they will be sent to a state hospital for competency restoration.  In felony cases, the defendant has up to 2 years to become competent.

Once they are found to be competent, they will be returned to the  jail and the criminal proceedings will move forward.

If they are still incompetent to stand trial, they can be placed into either an LPS (Lanterman-Petris-Short) Conservatorship or Murphy Conservatorship.

Case Examples of Insanity and Incompetency

We’re hoping that the explanation above was helpful.  Here are two case examples to help you apply the information we just went over.

John is diagnosed with schizophrenia.  He hasn’t been compliant with his medications for the past several weeks.  During a psychotic episode, he murders his roommate because he believes that his roommate is a demon that has been sent to kill him.

John is arrested, charged with murder, and he pleads Not Guilty by Reason of Insanity.  While he is in the county jail, he starts to take his medications and his psychotic symptoms are managed.  By the time he goes to court for his first hearing, there are no symptoms of psychosis.

In this case, John was legally “insane” at the time of his crime.  He is competent to stand trial because there are no overt symptoms of psychosis and he has a rational and factual understanding of the criminal proceedings.

If a jury believes that he was “insane” at the time of his crime, he can be committed to a state hospital.

Bill is diagnosed with Bipolar Disorder, with psychotic features. He is compliant with his medications and his symptoms are well managed.  Bill breaks into a house and burglarizes it.  A neighbor sees the crime in progress, calls the police, and Bill is arrested.  He is booked into the county jail and is awaiting his arraignment.

While in the county jail, Bill stops taking his medications and starts to present with manic symptoms.  By the time his arraignment hearing comes, Bill is in a manic episode.  He doesn’t understand the charges against him nor can he work with his attorney to form a defense strategy.

Due to his symptoms, the judge requests a competency evaluation.  He is evaluated and based on the fact that he doesn’t have a rational and factual understanding of the criminal proceedings, the expert reports to the court that Bill is incompetent to stand trial.

The judge orders Bill to a competency restoration program at a state hospital.  He stays at the hospital for 6 months and is stabilized on medications.  Bill is evaluated again by an expert who determines that he has a rational and factual understanding of the criminal proceedings and can return to court.

Bill is returned to the county jail where he will be held during the criminal proceedings.

The terms insanity and competency are two legal terms that come up often in the criminal justice system. Most people get the two terms mixed up and don’t know the differences between them.

We’re hoping that this blog post helped provide more information on these legal terms and how and when they are used in the criminal justice system.

If you’d like to learn more about Not Guilty by Reason of Insanity (NGRI) and Competency to Stand Trial,  read our full-length blog posts on these topics.